The calm in the storm

So blogger was kinda forcing me to update my blog's looks (apparently the template I was using isn't really supported anymore). So, after long deliberation (i.e. procrastinating studying), I decided to go with this.

Hope you like it! Overall, minimal change from the previous layout - what took me the longest was figuring out the background image. Lots to choose from, but I liked this the best.  Now, most people will jump and say - "obviously you picked this - you're Indian!" Yea well, ok that might have played a part in it. But more so, I like the image for what it represents in my mind: hope. The light of hope can be very small, like the lamp in the background, but it provides a gentle warming glow. This warm glow is just that - a warm glow - if you see with just your eyes. But if you open up to it, open your soul to it if you will, there is so much more you can see. To me, lamps and candles have a glow that brings a sense of calm. The glow encourages me to persevere. To not look for a calm in the storm, but to be the calm in the storm of life.

I find it interesting that Doctors can be the storm and the calm in the storm for patients. I can't imagine a storm worse than walking into a 22 year old patient's room, telling her she has lupus, and that she has severe consequences from it too like alveolar hemorrhage. This can potentially be a very dangerous complication - fatal even. And then you have a choice. Do you leave them in the storm, or do you help guide them through the storm? It frustrates me that so many doctors are not trained to do this. And trained they should be for 2 reasons:

1. The more obvious reason: it's part of our job. The human factor of medicine is what brought me here, and I'll be damned if I didn't learn this very important aspect of it. Gladly, Penn has an extensive Doctoring curriculum that does just that. And, for the most part, my attendings and residents are great about being the calm in the storm for our patients.

2. You aren't born with these skills. First instincts differ, but in general reacting on instinct doesn't help the patient. The worst first instinct is that doctors feel like a failure and very quickly try to draw out a plan for what to do next. Well and good, but that shouldn't be the first step. Or they try to grasp for false hopes. Or just don't know how to handle it and turn it over to people who they think will be more helpful (of all "inappropriate" reactions I've seen, this is arguably the lesser of the evils).

Interestingly, this was not going to be the point of this post. A friend of mine (let's call her Nandi):

was surprised I was "frustrated on multiple fronts" - she asked "aren't you doing great in everything?"

My response was along the lines of: "hah, no, the one thing I learned from working in pharma is to fake it. And I fake it damn well".

The point I was trying to make was - life's a storm. Everyone's life. It's not always easy to see because you aren't in their shoes. The question becomes, what do you do about it. For me, I can't possibly try to optimize everything and have the best outcomes on every front - I know and accept that. Doesn't keep me from trying though (which I'm sure is a catalyst for my frustration). So what's my solution to life whenever it feels like things are spinning out of control and I can't possibly keep it together? To stop myself from being a failure? 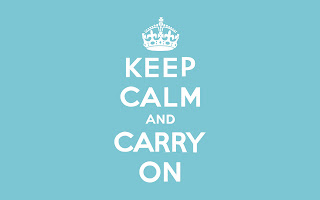 "When you're going through hell, keep going" eh?

And that is why I started off this post by talking about:

Hold tightly to the things that calm you - your friends, your pillow, your family. Because only you can be the calm in your storm.
Posted by Karthik at 7:31 PM